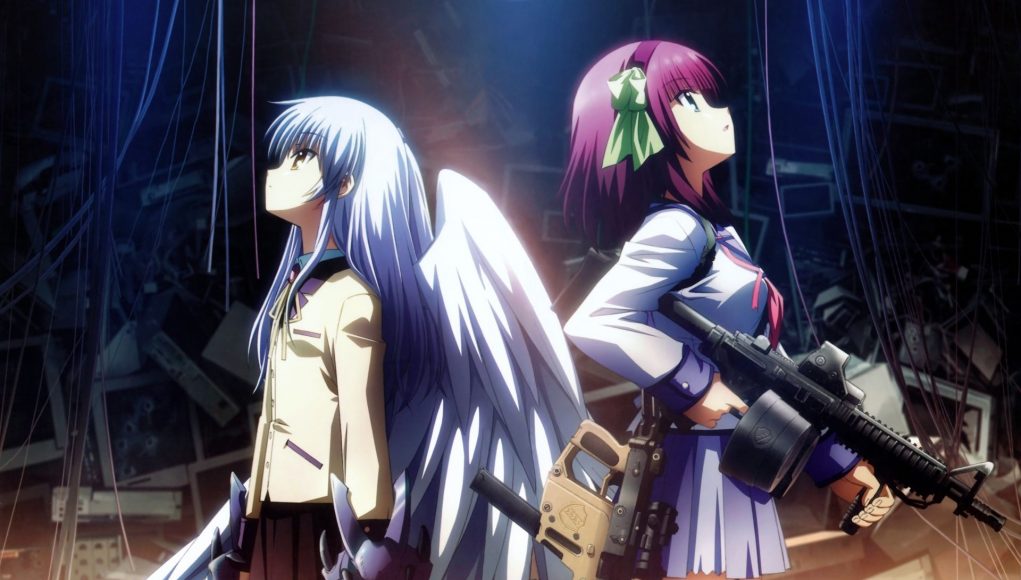 The world they are in seems like an enormous Japanese boarding school populated by soulless, though realistic and harmless, NPCs who act like ordinary students and faculty. The only apparent enemy of the self-named Shinda Sekai Sensen (Afterlife Battlefront) is the student council president, a short, white-haired girl they call Tenshi (Angel), who wields supernatural powers in an effort to force the SSS to behave like the normal students. Every real person who has submitted to this behavior has disappeared forever, so the SSS members are understandably unwilling. The Angel Beats! anime is the story of Otonashi’s time in this strange afterlife, as he learns about his situation, interacts with the others in the SSS and Angel, waits to regain his memories, and decides what to do after he does.

Angel Beats! takes place at a high school acting as a limbo for those who have died, where students learn to give up any lingering attachments they still have from life before passing on. Those in the afterlife school can still feel pain as they did when they were alive, as well as dying again, only to awaken later with no injuries. The story follows the main protagonist Otonashi, a boy who has lost his memories of his life after dying. He meets Yuri, a girl who invites him to join the Afterlife Battlefront (Shinda Sekai Sensen?, (SSS)), an organization she founded and leads which fights against God for the negative experiences the SSS members went through in life. In the SSS, there is a four-girl band named Girls Dead Monster that acts as a diversion during missions, and an organization called the Guild that mass-produces weapons out of dirt and supplies them to the SSS. Their only enemy is Angel, a girl who uses her supernatural powers to fight against the SSS. Angel creates her powers with the aid of a computer program called Angel Player. The rest of the afterlife school is populated by a large number of “normal” students and teachers Yuri deems “non-player characters” (NPCs), which are not human but look and act the part.

The first of the characters to fulfill her dream and pass on is Iwasawa, the leader of Girls Dead Monster. Angel, whose real name is Kanade Tachibana, loses her position as student council president and the vice president Naoi succeeds her. Naoi uses powers of hypnosis to control NPCs to fight for his own interests against the SSS, but Otonashi stops him after acknowledging Naoi’s existence and he subsequently joins the SSS. Otonashi regains his memories with the aid of Naoi’s hypnosis and agrees to continue with the SSS. Otonashi befriends Kanade and invites her to join in on SSS activities. After Otonashi fully remembers the details of his life and death, he starts cooperating with Kanade to help the other SSS members move on, and Kanade is reinstated as student council president in accordance with their plan. Yui, the girl who replaced Iwasawa after she passed on, is the second of the characters who passes on.

When mysterious shadow monsters begin attacking the SSS, Takamatsu gets devoured by one, only to reappear as an NPC. Otonashi reasons with the other SSS members and many of them agree to pass on in lieu of becoming an NPC, including the rest of Girls Dead Monster, Chaa of the Guild, and several unnamed members. Yuri destroys the computers responsible for the shadow program, which was programmed to activate when love was detected in the world, to prevent it from becoming a true paradise and maintain its limbo state. Those who are left—Otonashi, Yuri, Kanade, Hinata and Naoi—hold a graduation ceremony where they thank each other for their support. After Naoi, Yuri and Hinata pass on, Otonashi learns that Kanade’s regret was not being able to thank him for the heart she received from Otonashi after his death. Otonashi is heartbroken after she thanks him and passes on, as he has fallen in love with her. In the epilogue, two people resembling Otonashi and Kanade meet each other on the street in the real world. In an alternative epilogue, Otonashi is shown to have stayed behind in the afterlife to help people pass on.