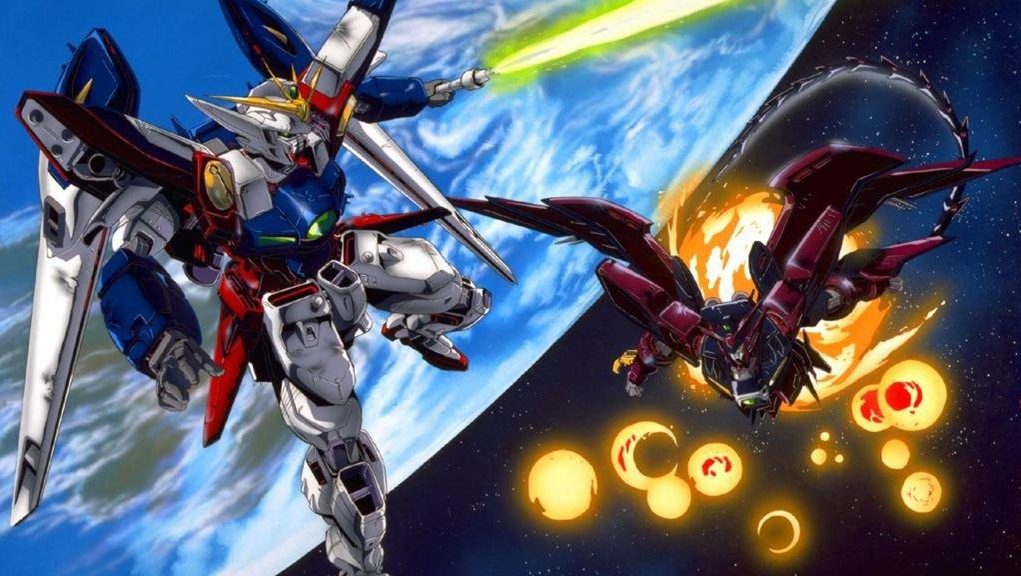 Mobile Suit Gundam: The Origin is a manga written and illustrated by Yoshikazu Yasuhiko. It is a retelling of the story from the 1979 anime television series Mobile Suit Gundam, of which Yasuhiko was the original character designer. An anime adaptation of the manga, focusing on the stories of Casval Rem Deikun (more famously known as Char Aznable) and his sister Artesia (Sayla Mass), produced by Sunrise began releasing in 2015. Yasuhiko is the chief director of the adaptation, with Sunrise veteran Takashi Imanishi as director, and Katsuyuki Sumisawa as the scriptwriter.

Sunrise announced in June 2011 that an anime adaptation of Gundam The Origin was in production. In March 2014, it was announced it will be a four-episode OVA series with event screenings at Japanese theaters, in celebration of the 35th anniversary of Gundam, and centering on the stories of Casval Deikun and his sister Artesia. The first episode, titled The Blue-Eyed Casval , premiered in limited Japanese theaters on February 28, 2015. Sunrise will produce an English dub to be recorded at NYAV Post for the first time since Bandai retired their Gundam license. Another two-episode OVA series, Mobile Suit Gundam The Origin: Loum Arc, will be released in 2017 and 2018.

The plot of the manga follows somewhat closely the plot of the original series. It is the year Universal Century 0079, and the eighth month of a vicious war between the Earth Federation and a breakaway nation of space colonists, the Principality of Zeon. The story follows the crew of the warship White Base, as they fight to ferry the experimental RX-78-02 Gundam mobile suit to the Federation base at Jaburo.

Yasuhiko further finally tells the entire back story of the Gundam universe in the manga. After the successful defense of Jaburo, the story diverts into a very in-depth flashback, told primarily from the viewpoints of Sayla and Char (with a secondary thread being told from Amuro’s POV) recounting the downfall of Zeon Zum Deikun, the rise of the Zabi family, the construction of Side 7 and the research into mobile suits, and leading up through a decade until the launching of the One Year War. It also goes into detail answering many previously unanswered questions such as the appearance of heretofore unseen Zeon mobile suits prior to the MS-05 Zaku I, how Dozle Zabi received his trademark scars and even the origin of Casval Deikun/Edward Mass’ “Char Aznable” identity. Volume fourteen, deals with the Battle of Loum at the beginning of the One Year War, and is the last piece of the in-depth flashback.

The story shifted back on track to the original anime’s storyline, featuring the White Base’s involvement in the Federation’s Operation Odessa, as well as including Kai Shiden’s encounter with Miharu. Afterwards, the manga deals with the end of the Odessa campaign and (in another departure from the series) takes M’Quve and his Gyan out of the picture before he has a chance to confront the Gundam.

Set in a fictional universe in the year 2079 (Universal Century year 0079 according to the Gundam Calendar), the Principality of Zeon has declared independence from the Earth Federation, and subsequently launched a war of independence called the One Year War. The conflict has directly affected every continent on Earth, also nearly every space colony and lunar settlement. Zeon, though smaller, has the tactical upper hand through their use of a new type of humanoid weapons called mobile suits. After half of all humanity perishes in the conflict, the war settled into a bitter stalemate lasting over 8 months.

The story begins with a newly deployed Federation warship, the White Base, arriving at the secret research base located at the Side 7 colony to pick up the Federation’s newest weapon. However, they are closely followed by Zeon forces. A Zeon reconnaissance team member disobeys mission orders and attacks the colony, killing most of the Federation crew and civilians in the process. Out of desperation, citizen boy Amuro Ray accidentally finds the Federation’s new arsenal—the RX-78 Gundam, and neutralizes the situation. Scrambling everything they can, the White Base sets out with her newly formed crew of civilian recruits and refugees in her journey to survive.

On their journey, the White Base members often encounter the Zeon Lieutenant Commander Char Aznable. Although Char antagonizes Amuro in battle, he takes advantage of their position as Federation members to have them kill members from Zeon’s Zabi family as part of his revenge scheme. Amuro also meets ensign Lalah Sune with whom he falls in love, but accidentally kills when facing Char. When the Federation Forces invade the Fortress of A Baoa Qu to defeat the Zeon forces, Amuro engages on a final one-on-one duel against Char due to their shared hatred for Lalah’s death. Having realized he forgot his true enemy, Char stops fighting to kill the last surviving Zabi member, Kycilia Zabi. Amuro then reunites with his comrades as the war reaches its end.

The majority of Gundam animation, including the earliest series, occur in what is known as the Universal Century (UC) calendar era, with later series set in alternate calendars or timelines. Universal Century makes up the dominating majority of the entire franchise. While many new Gundam stories are told in their own parallel universe with independent timelines, giving them a greater degree of creative freedom, the original U.C. storyline continues to be extremely popular for a variety of reasons. It established the series and delivered many of its best moments, as well as setting the standard for realistic hard science fiction in anime; the original Gundam marked the maturing of the Giant Robot genre. Also, nostalgia for the oldest of the Gundam shows (and Gundam’s resulting status as a pop-culture icon in Japan) is still a major factor in its continuing success.

The general narratives of Gundam shows classify as war drama. They revolve around the mobile suits and their pilots fighting in a war, in which destruction and dehumanization are inherent, through multiple sides; each faction has their own heroes and villains, all of which have their own unique motives, failings, and virtues. Gundam features political battles and debates on important philosophical issues and political ideals on the nature and meaning of war, the ideal of pacifism, and the continuing evolution—natural or engineered—of humanity and its consequences. These are often framed in the series as a debate between the protagonist and antagonist over the course of a duel, as they try to convince each other of the righteousness of their causes. Most of the stories are structured as “coming-of-age” dramas, where the main cast’s personalities, points of view, allegiances, goals, and actions may or may not change dramatically as events unfold. This makes the plot seem more realistic than earlier super robot animated series where the hero and cast usually act in the same predictable manner, with little connection between the episodes. The best example of this is how the personalities of longtime rivals, Amuro Ray and Char Aznable, are influenced by their experiences in the Gundam saga.