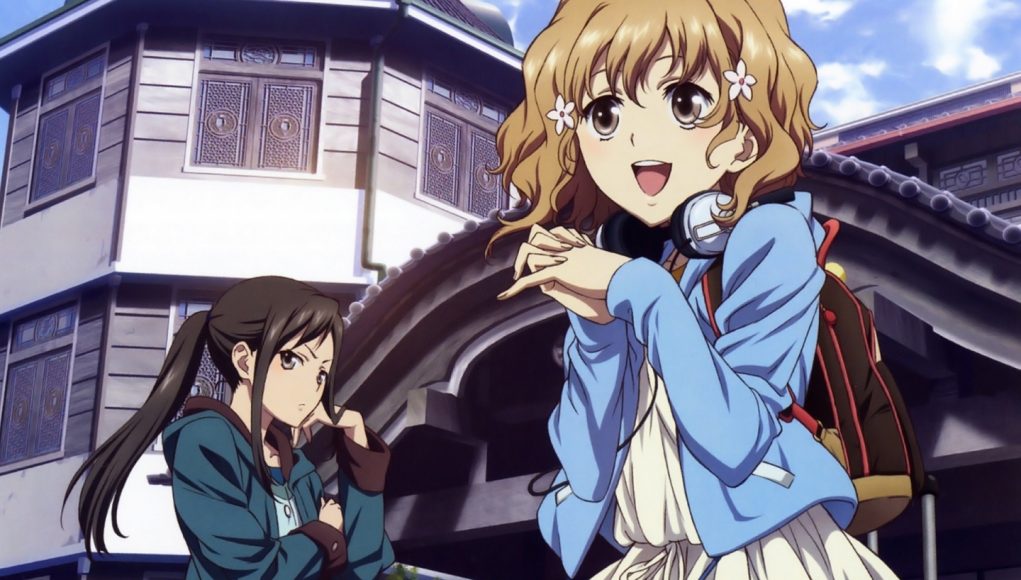 Blossoms for Tomorrow, as Hanasaku Iroha in Japanese original title, that centers around the very, very cute girl, Ohana Matsumae, as the heroine in the title, a 16-year-old living in Tokyo, who is left in the care of her estranged grandmother, following her mother’s elopement with her boyfriend. Ohana arrives at her grandmother’s country estate to realize she is the owner of a Taishō period hot spring inn called Kissuisō. She begins working at Kissuisō at her grandmother’s request, but finds herself at odds with many employees and customers at the inn. Initially feeling discouraged, she decides to use her circumstances as an opportunity to change herself for the better and to make amends with her deteriorating relationship with the Kissuisō’s staff for a more prominent future.

The Hanasaku Iroha 26-episode anime television series is produced by P.A.Works and directed by Masahiro Ando. The series aired in Japan between April and September, 2011 on Tokyo MX TV. The screenplay was written by Mari Okada, and chief animator Kanami Sekiguchi based the character design used in the anime on Mel Kishida’s original designs. Sound direction was headed by Jin Aketagawa and the music was produced by Shirō Hamaguchi. The anime series was simulcast in the United States, Canada, the United Kingdom, Ireland, Australia, New Zealand, Sweden, Denmark, Norway, Finland, Iceland, Netherlands, Brazil, and Portugal by the Internet streaming website Crunchyroll. The series has been licensed in North America by NIS America under the title Hanasaku Iroha: Blossoms for Tomorrow. The first Blu-ray/DVD combo pack was released on April, 2013 and the second part was released on July, 2013.

Ohana is an energetic and optimistic 16-year-old girl and the protagonist of Hanasaku Iroha. She is sent to live at her estranged grandmother’s hot spring inn, Kissuisō, after her mother elopes with her boyfriend to evade his debt. Her best friend, Kōichi Tanemura, confessed his feelings to her before her departure, which was left unanswered until later in the series. At her grandmother’s demand, she works at the inn as compensation for staying there. After parting with Koichi, she realized that she has feelings for him, though she still hasn’t admitted it yet. However, she is always dependent on him. She is a strong willed girl who is stubborn and is realistic for her age. She likes to drink a mix of cola and black tea.

Minko Tsurugi Voiced by: Chiaki Omigawa
Minko is a 16-year-old apprentice chef and resident at Kissuisō. She is a tsundere, and dislikes Ohana from their first meeting, nicknaming her balut (she pronounces it hobiron (“hột vịt lộn” in Vietnamese for balut)), but has slowly accepted her as a friend. Against her parents’ wishes, her dream is to become a professional chef, resulting in her search for training opportunities. Her search led her to Kissuisō, where Tōru Miyagishi accepted her as an apprentice chef. Since then, she has strong feelings for him and becomes jealous when he talks about other girls.

Nako Oshimizu Voiced by: Aki Toyosaki
Nako is a shy and timid 16-year-old cleaning part-time maid and waitress at Kissuisō. She has three younger siblings whom she assists her parents in raising. She becomes close friends with Ohana and teaches her how to perform her duties. Nako is very good at swimming, by which she gains since childhood the nickname “Kappapa”, after an aquatic mythic creature kappa.

Yuina Wakura Voiced by: Haruka Tomatsu
Yuina is the 16-year-old daughter and heiress to the Fukuya Inn, the rival inn of Kissuisō. She is in the same high school as Ohana, Minko, and Nako, and is seen hanging out with them on several occasions. She is divided on the choice of whether to go on with her family’s inn-running business, or to find herself a different form of career fulfillment.

Kōichi Tanemura Voiced by: Yūki Kaji
Kōichi is a 16-year-old teenager who is Ohana’s best friend. Kōichi confessed his feelings to Ohana before her departure, but was too afraid to hear her answer and ran away. He often offers Ohana support when she feels down. As the story progress, he feels abandoned by Ohana as she adjusts to her new lifestyle.

Sui Shijima Voiced by: Tamie Kubota, Takako Honda (young)
Ohana’s 68-year-old grandmother and owner of Kissuisō. Behind her fierce and strict composure towards her employees (to the point of physically reprimand them), Sui eventually reveals herself as comprehensive and caring toward them when most needed thus earning not only obedience from them, but also respect and devotion.