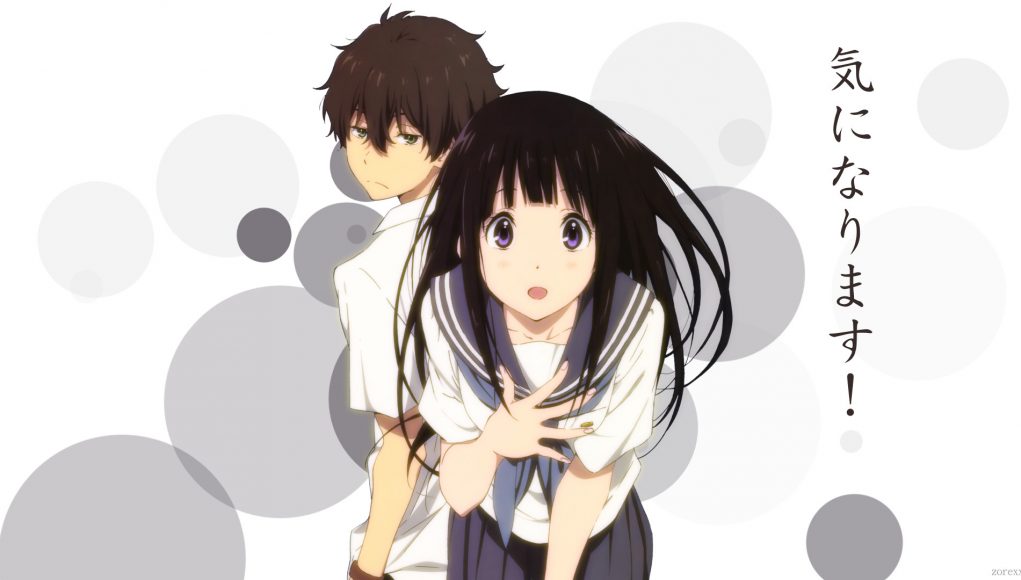 A 22-episode anime adaptation of the first four novels, directed by Yasuhiro Takemoto and produced by Kyoto Animation, aired in Japan between April 22 and September 16, 2012. A bonus original video animation episode was streamed online on UStream on July 8, 2012 and was later released on Blu-ray Disc with the third manga volume on January 12, 2013.

Hōtarō Oreki is a high school boy, who always acts passively. One day, he enters “Koten Bu (Classic Literature Club)” as recommended by his elder sister.

There he meets Eru Chitanda, Satoshi Fukube and Mayaka Ibara. Chitanda is an intelligent and soft-spoken girl, but turns into an embodiment of curiosity once she says, “I’m curious!”. Fukube is an ever-smiling boy with a fantastic memory, though he never deduces anything on his own. Ibara is a short girl and is strict with others and herself. She loves Fukube, but he always dodges her approaches.

They begin to investigate a case that occurred 45 years ago. Hints of the mystery are buried in an old collection of works of the former members of Koten Club. The collection is titled “Hyouka”.

Hōtarō Oreki
The main protagonist of Hyōka, he is a pragmatic boy who lives by “If I don’t have to do something, I won’t, but if I have to, I’ll do it quickly.” He only joins the Classic Literature Club at the request of his older sister, Tomoe Oreki, to stop it from being dissolved. He says that he doesn’t like to waste energy, but if given a mystery to consider, he will see it through until it is solved with his brilliant logical deductions. To him, Eru is “someone he can’t ignore,” hinting that he may have feelings for her. At her urging, he soon finds himself more involved with high school life.

Eru Chitanda
An inquisitive girl who joins the Classic Literature Club. Eru’s catchphrase is “I’m curious!” Although she earns top grades in school, outside of the world of academics she is rather ditzy and relies on Oreki’s reasoning abilities. An energetic girl, she is well-versed in the town traditions and etiquette, having come from a lineage of wealthy farmers. Whenever a mystery is brought to her attention, she is unable to stop thinking about it. She holds great admiration for Oreki, often praising him for his deductive talent and ability to solve most any problem. It is hinted that she harbors feelings for Oreki.

Satoshi Fukube
Hōtarō’s classmate who joins the Classic Literature Club with him. He is proud of his impressive memory, referring to himself as a human “database”, and wears a perpetual grin. Although he always urges Oreki to participate more in life, it is revealed that he is also secretly jealous of Oreki for his critical reasoning abilities. He calls Mayaka Ibara by her first name, which indicates the two are close. Later on, Satoshi reveals that he does have feelings for Mayaka, but doesn’t want to become “obsessed” with her. He begins to date Mayaka in the spring of their second year.

Mayaka Ibara
The fourth member of the Classic Literature Club; she joined after the other three. She and the boys attended the same middle school. She doesn’t get along well with Hōtarō though their relationship starts to improve after she befriends Eru. Mayaka has a passion for drawing manga and is also a member of the school’s manga club, though she is extremely reluctant about expressing it. Mayaka has long harbored romantic feelings towards Satoshi, who has always treated her in a frivolous way. She later begins to date Satoshi. She refers to Satoshi as Fuku-chan.