ホーム Anime Movie Beyond the Boundary | I’ll be here 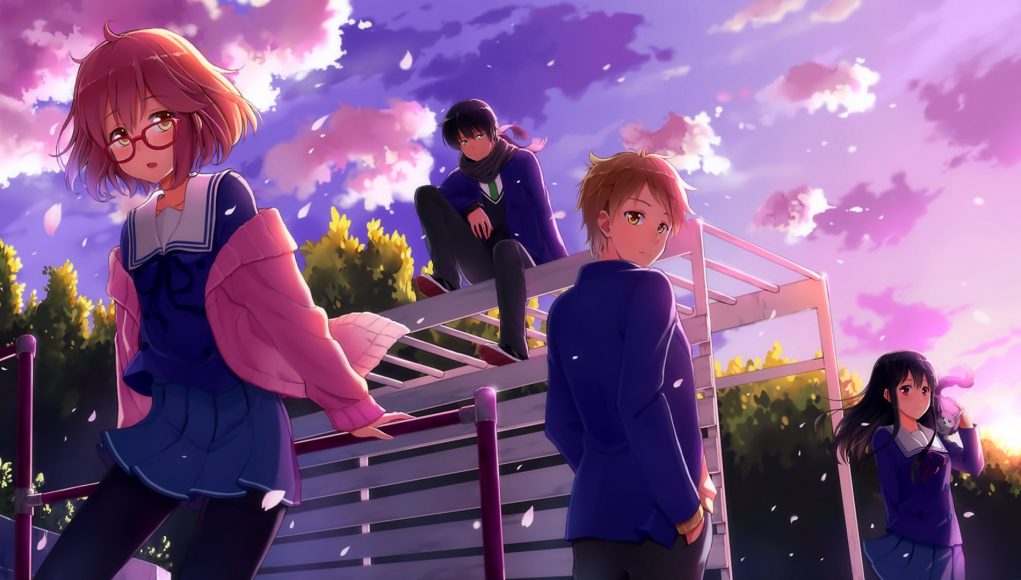 Beyond the Boundary (Kyōkai no Kanata) is a Japanese light novel series written by Nagomu Torii, with illustrations by Tomoyo Kamoi. The work won an honorable mention in the Kyoto Animation Award competition in 2011. Kyoto Animation has published three volumes since June 2012. An anime television series adaptation, produced by Kyoto Animation, aired in Japan between October and December 2013. An original video animation episode was released in July 2014. A two-part anime film project premiered in March and April 2015.

One day, high school student Akihito Kanbara instinctively goes to save his fellow schoolmate, Mirai Kuriyama, from committing suicide. Following his pleas, Mirai suddenly stabs Akihito with a sword formed out of her own blood and is shocked to discover that Akihito is an immortal “half-youmu”—the offspring of a supernatural creature, called a youmu, and a human. After learning that Mirai is a Spirit World Warrior (Ikaishi)—specialists who protect humans from being affected by youmu—and the last surviving member of her spirit hunting clan, their lives become intertwined as Akihito seeks to help Mirai gain the confidence to kill youmu so that she may stop attempting to kill him as practice.

In Beyond the Boundary, youmu (yōmu, alt. Dreamshade) are supernatural creatures that appear throughout the series and can only be seen by those with a supernatural affinity. They are said to be the physical materialization of human animosity such as negative emotions including hatred, jealousy and malice and therefore as long as humans exist, youmu will continue to exist. They can exist in many types of shapes and forms with some even having a human appearance. There are also rare cases when a youmu and a human mate may produce an offspring, which is called Half-Youmu (Han-Yō, “Half-Shade”). Most youmu are relatively docile and coexist with humans without them even aware of their presence. However, there are times when a youmu’s behavior upsets the balance, so the Spirit World Warriors are sent in to kill them. Upon death, a youmu produces a Youmu Stone (Yōmu Ishi, alt. Dreamshade Stone) which can be appraised and traded, hence providing a source of income for a Spirit World Warrior.

Black Butler | Book of the Atlantic

Your Name | Kimi no Na wa