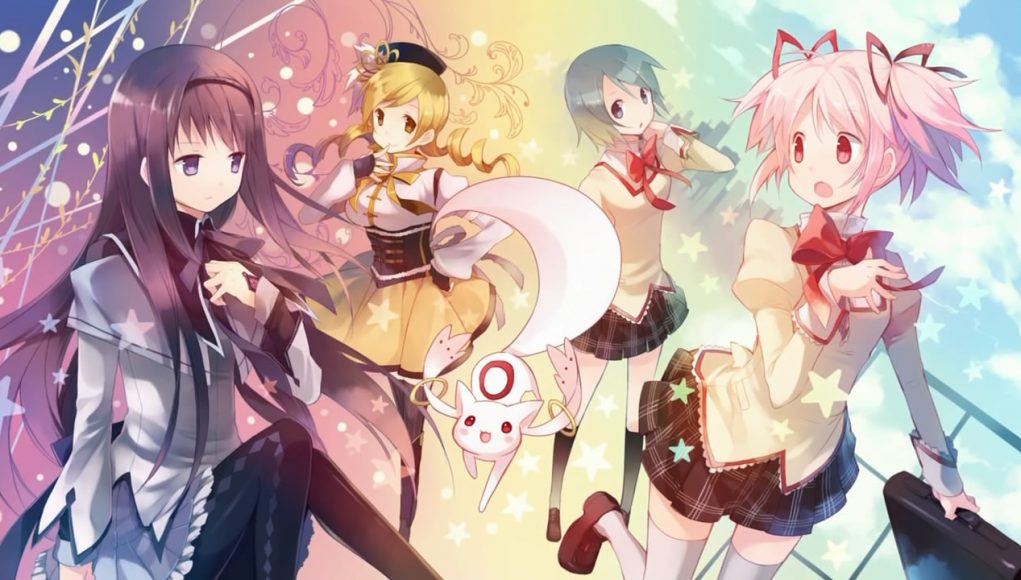 In the fictional city of Mitakihara, Japan, a middle school student named Madoka Kaname and her friend Sayaka Miki encounter a small, cat-like creature named Kyubey. It offers a contract in which a girl may have any wish granted in exchange for obtaining magical powers and being tasked with fighting against witches. Meanwhile, a transfer student and magical girl named Homura Akemi tries to stop Madoka from making the contract with Kyubey at all costs. Madoka and Sayaka then meet Mami Tomoe, an upperclassman at the same school who is also a magical girl and offers to bring them along on her witch hunts so that they may learn of the responsibilities that come with being a magical girl.

As Madoka contemplates accepting the contract with Kyubey, she witnesses the death of Mami at the hands of a witch and realizes that a magical girl’s life is filled with danger, anguish, and suffering. This is further enforced by the appearance of Kyoko Sakura, a veteran magical girl whose wish indirectly caused the death of her family. Madoka also discovers that not only do magical girls give up their souls to form their Soul Gems, the source of their magic, but when those Soul Gems become too tainted with despair, they transform into the very witches they fight against. This is exemplified when Sayaka, heavily disillusioned with the current state of the world, falls into an irrecoverable despair that turns her into a witch. It is then revealed that Kyubey’s alien race is harvesting the emotions from magical girls to use as energy to counteract the spread of entropy. Madoka also learns that Homura is a magical girl from a different timeline who has repeated the same month countless times in order to try to save Madoka from a grisly fate. After these revelations, Madoka decides to become a magical girl with the wish to stop witches before they are created. This rewrites the laws of the universe, resulting in Madoka becoming nothing more than a concept and Homura being the only one who remembers her in the new world that is formed.

While collaborating on Hidamari Sketch and Bakemonogatari, Akiyuki Shinbo expressed to Aniplex producer Atsuhiro Iwakami his desire to create a new magical girl series, thus spawning the development of Puella Magi Madoka Magica. During the early planning stage, Iwakami decided not to adapt an existing work in order to give Shinbo more freedom in his direction style. Another goal of the project was to develop an anime that could appeal to a wider audience than the usual demographic for media within the magical girl genre. Iwakami and Shinbo intended for their series to be accessible to “the general anime fan.” Shinbo then contacted Gen Urobuchi to work on the project as a scriptwriter and Ume Aoki as a character designer. Takahiro Kishida was also enlisted to adapt Aoki’s character designs for production of the television series.

In his role as producer, Iwakami took a mostly hands-off approach. Due to Puella Magi Madoka Magica being an original series rather than an adaptation based off an already existing work, he described the main goal solely as “coming up with a high-quality piece of entertainment.” After helping to recruit the staff, he allowed them mostly free rein in developing the actual content of the story, providing minimal guidance from himself. After viewing the character designs that Aoki created, he became fully assured that he could trust the creative talent of the team. In an interview with Anime News Network after the series finished airing in Japan, Iwakami summed up his philosophy as “I don’t matter much; it’s up to those talents to do their work. If something comes to a stand-still I might intervene, but they did an excellent job and I was very happy seeing the results in episode one.”