Kalafina is a Japanese vocal group formed by the composer Yuki Kajiura in 2007, mainly to perform theme songs for the anime Kara no Kyōkai.

The group first appeared in January 2008 with two original members from Yuki Kajiura’s FictionJunction project, Wakana Ōtaki and Keiko Kubota, whose membership was not confirmed until the first Dream Port 2008 concert held on 29th April 2008. In May 2008 it was announced that two more vocalists, Maya and Hikaru, would be added to the project. 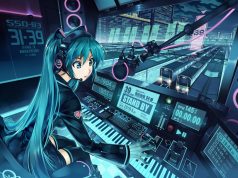