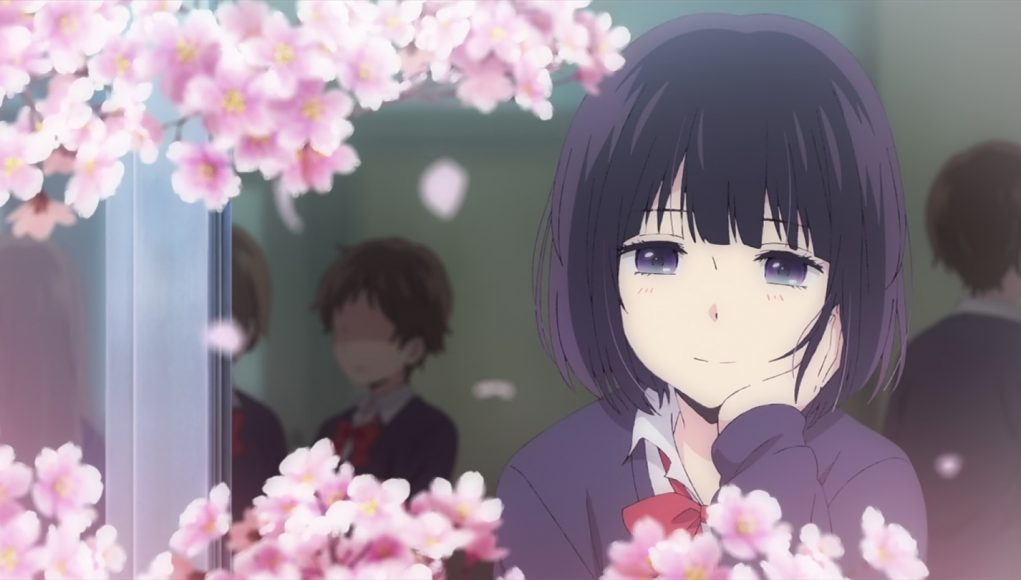 Kuzu no Honkai is a Japanese manga series by Mengo Yokoyari. It has been serialized in Square Enix’s seinen manga magazine Big Gangan since 2012 and has been collected in eight tankōbon volumes. An anime television series adaptation by Lerche began airing from January 12, 2017 on Fuji TV’s Noitamina block.

High school student Hanabi Yasuraoka has been in love with her older childhood friend, now her homeroom teacher Narumi Kanai. But from the look in Narumi’s eyes when he sees the new music teacher Akane Minagawa, Hanabi realizes that he is in love with Akane and not her. Hanabi meets Mugi Awaya, another student who is in love with Akane, who was his tutor when he was in middle school. Hanabi and Mugi make a pact and begin a fake relationship to satisfy each other’s loneliness from their respective unrequited loves, both sexually and emotionally. They agree to not fall in love with each other and end the relationship if their love is returned from the people they are in love with.

Mugi Awaya
A high school student who is in love with Akane. He and Hanabi begin a fake relationship to sastisfy each other’s desires. In middle school, Mugi had already been in a secret relationship with his senior, Mei Hayakawa, who took his virginity since he was not able to confess his love to Akane. Mugi had always been aware of what kind of person Akane is, but loved her nevertheless. Later in the series, Mugi confesses to Akane and they go on a date. However, after the date, Mugi realizes that he cannot hold on to his ideal image of Akane he had and bids farewell to Akane with the hopes that he can finally move on from her.

Narumi Kanai
Hanabi’s older childhood friend and neighbor who becomes her homeroom teacher in high school. His mother died when he was young, so he usually went to Hanabi’s home for homemade meals. He is attracted to women with long hair, as they remind him of his mother. Even after knowing Akane’s true nature, Narumi does not seem to mind and asks her to marry him, which she accepts.